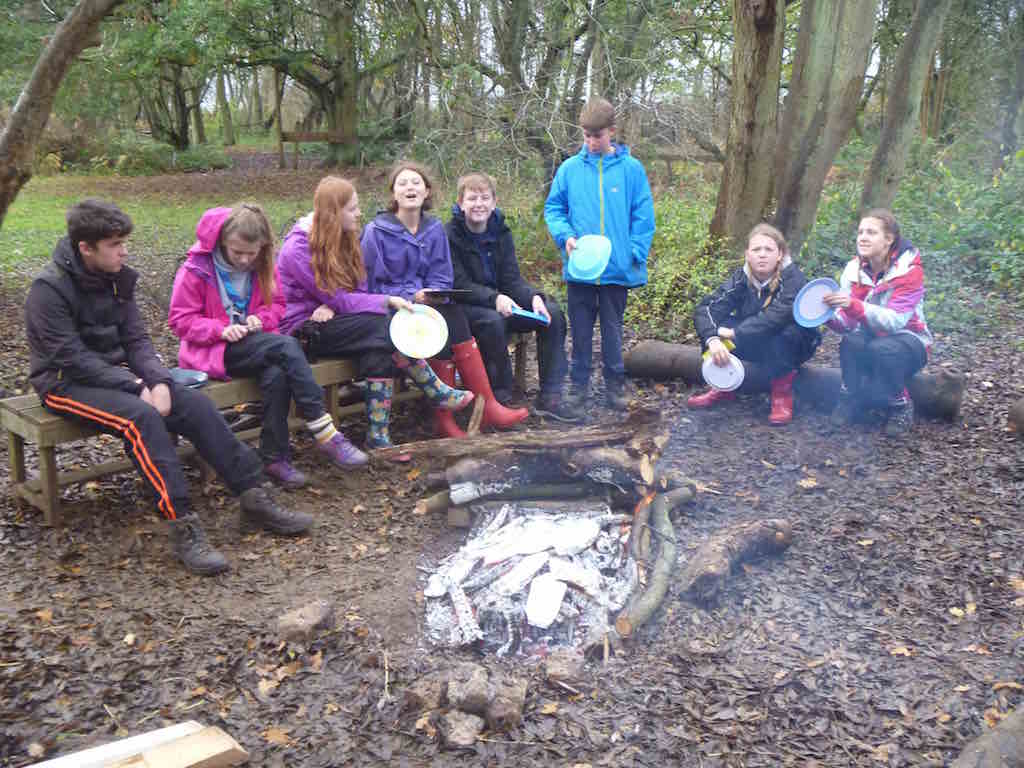 We arrived at Duke’s Covert Campsite at 9.00 on Saturday. Everyone arrived in good spirit although it was a shame the weather wasn’t as nice, but that wasn’t going to stop us. The explorers began by unloading the trailer and putting up tents, so that the real fun could begin. Most of our food throughout the weekend was cooked on a fire, so we all went collecting wood. Some of us even had a go at some axe and saw skills, to cut down the larger pieces.

Later, we spoke to some bushcraft leaders that were also on site that day. We also met some bushcraft students that had been perfecting their shelters over several weeks, whilst learning various different skills to help them when they stay overnight in the winter, with the bare necessities to survive.

We then went back to our own camp, and began to make lunch. By this point, the weather had brightened up a bit and the fire was going strong. For lunch, we made pitta pizzas, made with various different fillings, then wrapped in foil and placed on the fire. Most were a success despite one or two being a little on the burnt side.

Then most explorers had a go on the rope swing, which, other than the odd slip, was great fun. Some explorers, decided to put up hammocks, so that they could sleep under the stars. Although few actually followed through, with Jonathan being the only one to spend the whole night and Ben almost made it the whole night but went back into his tent.

After a dinner of delicious beef stew, we played some wide games like hide and seek in the dark, capture the keys and many others. In the evening, Andy went through into the clearing alongside our camp area and scattered hundreds of glow sticks everywhere. We divided ourselves into teams of three and went in search of the glow sticks. By this time it was dark, and we thought that it should be easy to find them all, if only Andy had snapped them all so that we could see them. The game was very entertaining and very energetic: “it was so fun, my team should of won though” said Shannon.

This was followed by a game of capture the flag, but with glowsticks. Everyone got competitive and really into the game, the explorers enjoyed it so much that we played the game several times, before having marshmallows, then sitting around the campfire.

The next morning, we were all up bright and early. To begin with, we all went on a hunt for more wood to get the fire going again, so that we could cook breakfast. After a tasty breakfast, we were allowed some free time to do as we pleased. Some of us went on the rope swing again, some went exploring the campsite, and some went and practiced some axe skills. We began to clear up, and pack away camp whilst others prepared lunch.

For lunch we had jacket potatoes cooked on the fire with beans and cheese. All that was left to do was take down the rest of the tents, and go home. We ended an amazing camp with everyone gathered round the flag pole for flag down. It was a fantastic experience where the group has made lots of memories together.

Written by the very talented Jess

Fun in the snow on Jungfraujoch

During August, 1st Flintham and other scout groups from Newark district went on an Alpine Adventure to Switzerland. We went for two weeks, one week in a chalet in Adelboden and the next in the international scout centre in Kanderstag.

We did a range of activities such as scrambling up a via ferrata, white water rafting, zip lining, an over night hut expedition and lots of walking. The team who completed the over night hut hike climbed to 2480 metres. We were high enough to walk on a glacier.

One of the most memorable activities was the Junfrau trip, it has the highest railway station in Europe at 3,454 metres.